Boo Ada (aka Master Random) paid me a visit in Boston! Listen to us talk about music and other random stuff. 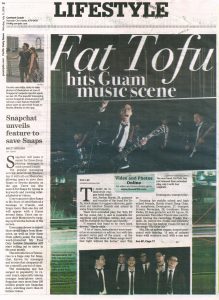 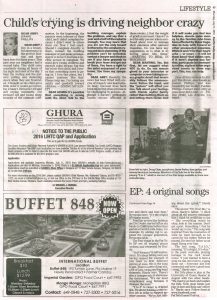 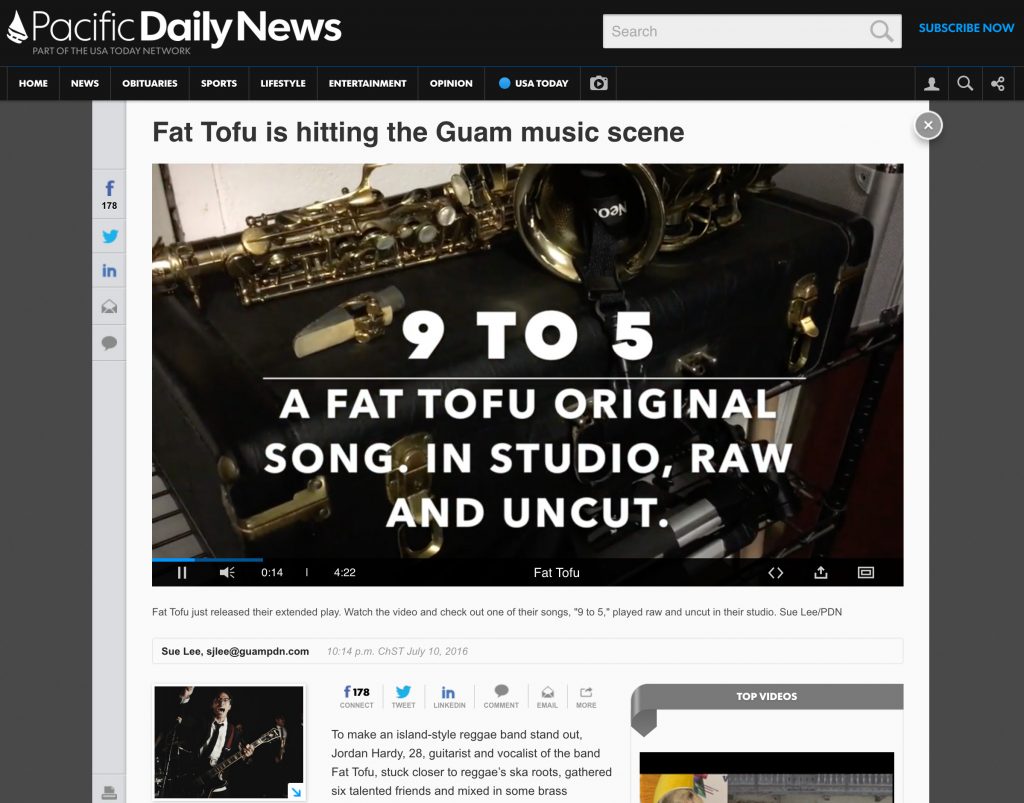 Check out the nice writeup by Sue Lee! Complete with a live video performance of one of our rehearsals. 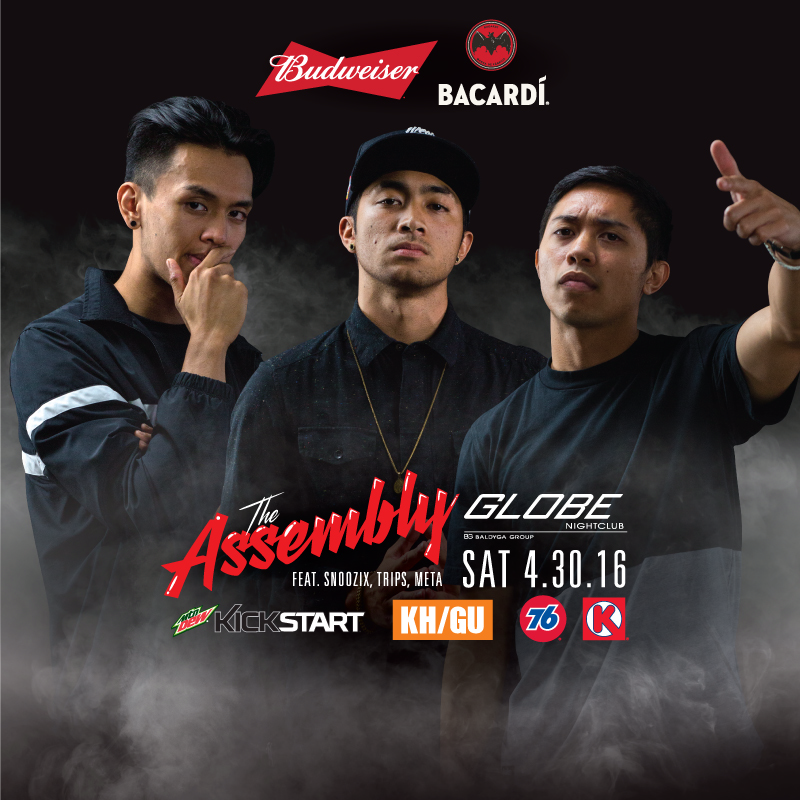 Check out this cool event I have the pleasure of being a part of! A bunch of us formed a backing band to play behind some of the most amazing local rappers. Doors open at 9pm, and the music begins at 10am! 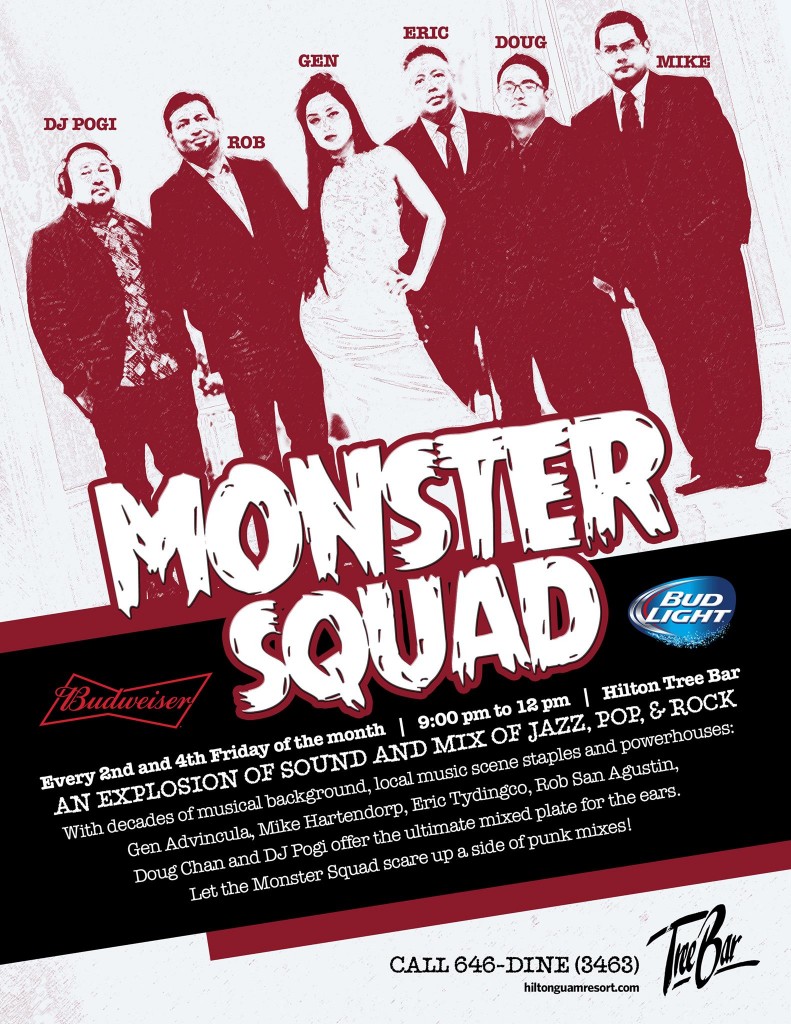 Come check us out! We start tomorrow night, Friday April 8, 2016, from 9pm to Midnight! I’ll be playing sax and doing sound. 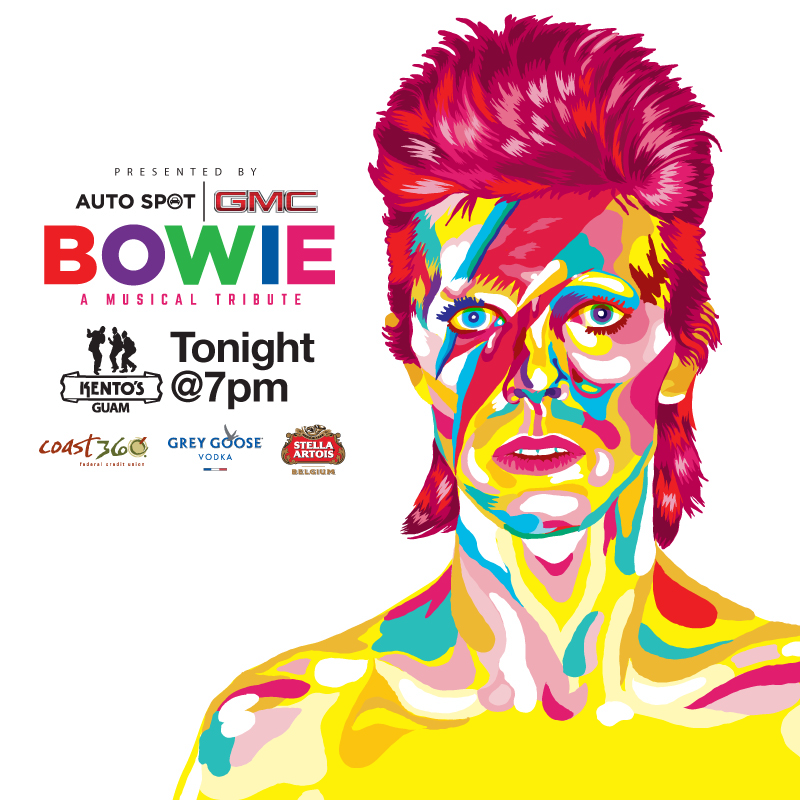 The Calypso Group hired a bunch of us musicians to learn two sets worth of David Bowie music, and we did it! It was a great experience to be part in a band with some of my favorite musicians:

We also had a couple guest singers come on stage for a few sings: John Leon Guerrero and Edgar Flores.

Many of us weren’t really Bowie fans getting into this. I think Mike was the only one who listened to Bowie extensively. The rest of us are definitely big fans now after putting on the show. Some videos will be coming up soon with footage from the event. Stay tuned! 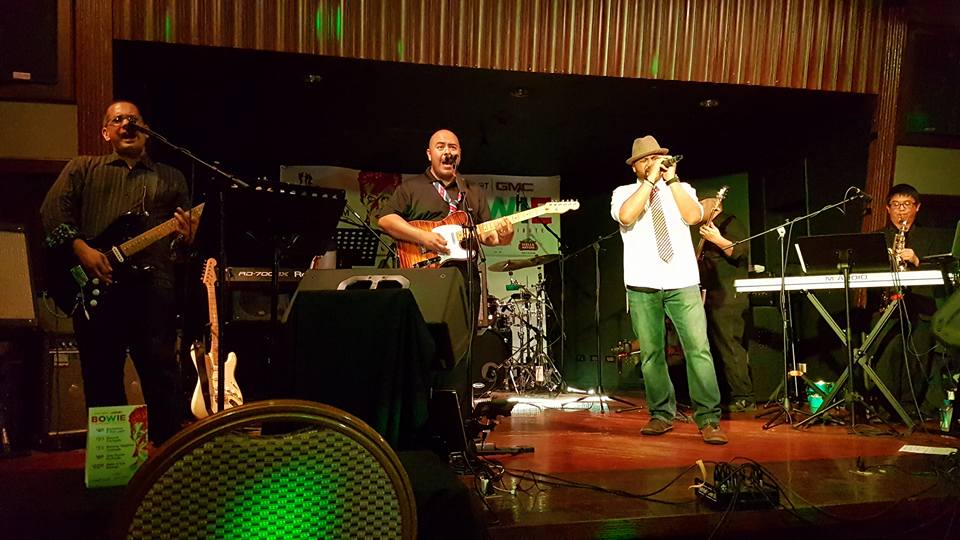 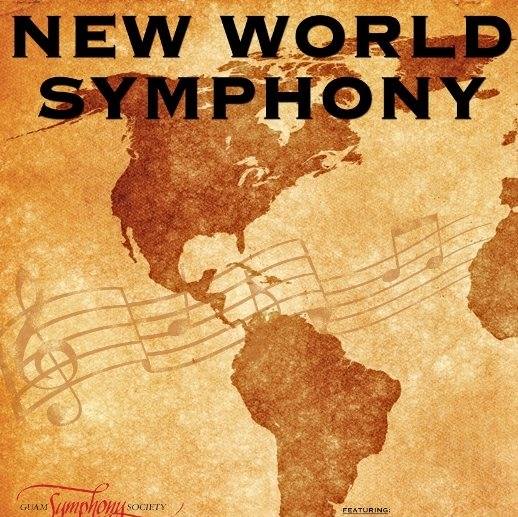 Probably one of the most rewarding concerts I’ve had the honor of playing for! I got called in last minute to fill in for 2nd oboe (thanks to my student Jia Jia for letting me borrow her nice oboe). We’re going to be playing Liszt’s Preludes, Dvorak’s New World Symphony, and Rodrigo’s Guitar Concerto (performed by Guam’s own Dave Duenas).

I think my favorite part about this concert though is playing alongside Kendra Johnson. She got her master’s degree in Oboe performance, and I’ve never played with anyone with such a beautiful tone. She’s also super friendly and full of great information and loves to share advice, so it’s been just a great experience overall. Check out her website at http://www.kendrajohnsonmusic.com!

Concert Band Recording at Cars Plus! 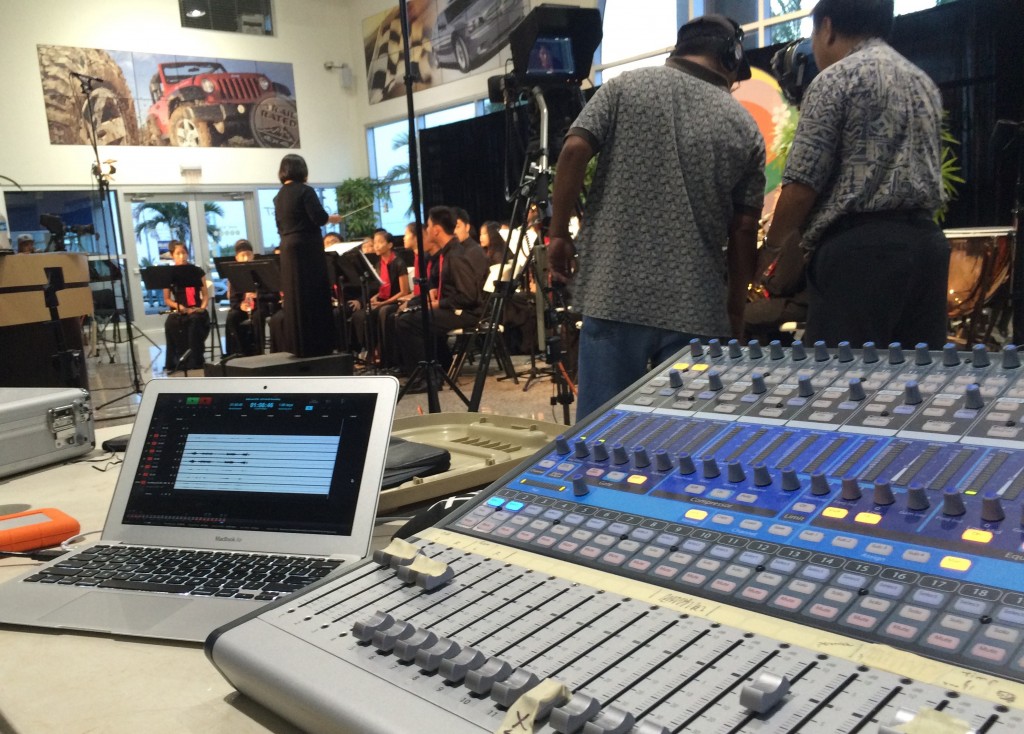 I, alongside PBS, spent my Sunday recording the Guam Territorial Band and Guam Honor Band at the Cars Plus showroom in Maite. I used about 10 mics this time instead of the usual 2-4 that I use.

I mic’ed the front with two condensers as well as two floor mics. I then mic’ed the entire percussion section for added clarity. I brought my 24 channel mixer though, so if the space permitted, I would have used more mics…especially since the trumpets weren’t really coming into the mix.

It was a new and fun learning experience for me regardless :) The recording was for a telethon to be aired on PBS Guam (Channel 12) Thursday night, April 30, from 7pm to midnight. Enjoy!

I’m playing 1st trombone on a couple of the pieces, and honestly, it’s giving me a real run for my money, because well, I can’t read tenor clef all that well (getting better though), and also because the notes are insanely high! I’m usually hovering between High F and double High Bb, sometimes going lower, and rarely even going higher. Coming from a sax player, it’s quite challenging, but I’m always down for a challenge >:) 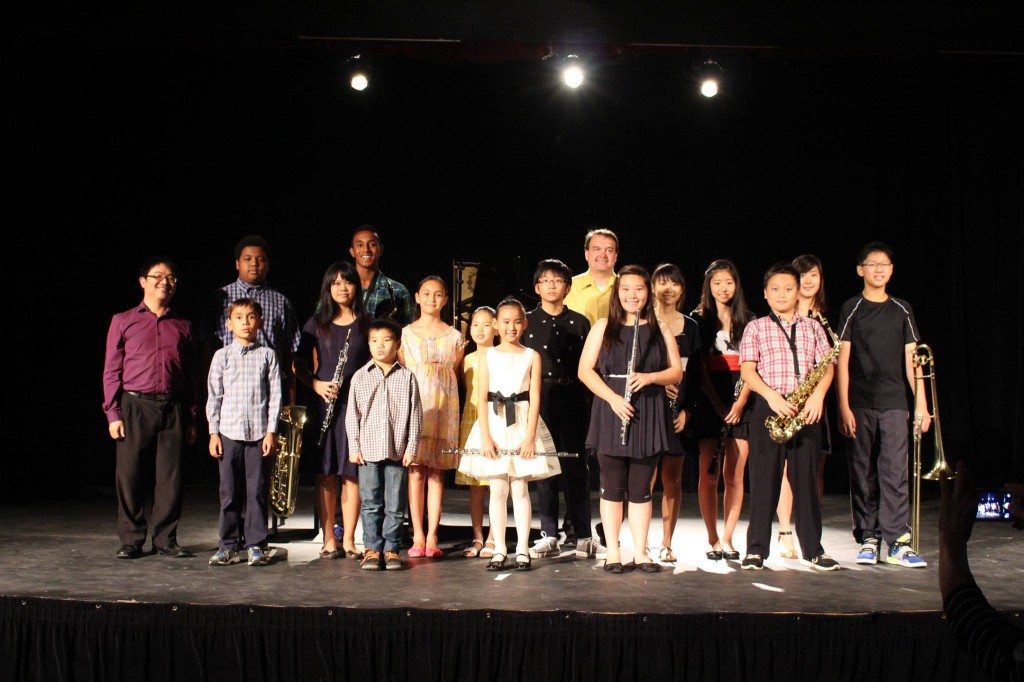 I am so mad. There was air conditioning issues with the Southern High School auditorium which is home to GATE Theater. The parts are there, but they aren’t able to make the repairs until next week. Because of this, they had to cancel the last couple nights of Grease.

There are no words. Hundreds and hundreds of cumulative hours of work had gone into putting together this show, but now they had to cut the run short all on a count that GovGuam and DOE can’t get their act straight.

They had better not run the auditorium into the ground again. It was closed for almost 10 years in the past because they didn’t know how to upkeep it. This is the best auditorium that Guam has, and it would be a shame for it to go away again.

Beyond The Box – Guam

I’ve been buying my Macs and other Apple Products on eBay for years now. Sometimes, I’ll even buy straight from the Apple online store.

Neither has been ideal for me though. With eBay, sometimes, you never know what you’re going to get. Luckily, I haven’t had a problem with that yet. With the Apple online store, they don’t ship to Guam. So, not only do you have to pay tax (which hurts, by the way), you have to pay extra shipping to use a forwarding company (I use Aloha Forwarding, which runs on the expensive side).

So you can imagine my excitement when I heard there was an official Apple reseller chain opening on Guam.

I visited the store twice this weekend. It’s beautiful, just like an original Apple Store. There were plenty of things to play with, and they had everything on display. The staff was very helpful and friendly too, greeting you as you enter and answering any questions you might have.

You’d think the pricing would be high, especially for Guam, right? Nope! The prices are PHENOMINAL! They pretty much charge the same price as the the Apple Store, adding 4% GRT. This is way cheaper than what you would spend buying a new item anywhere in the United States (except for maybe New Hampshire, which doesn’t have sales tax).

Ok ok, everything good so far, right? Well, here’s the catch… They don’t carry stock of Apple’s newest items. My wallet is ready to purchase a Retina iMac. I was actually going to, too, but they didn’t have any in stock. Honestly, I’ve been wanting an iMac so bad to start on iOS development that I would have settled for a 2013 iMac if they had a Fusion Drive option, but mostly everything they carried in stock was base model or a step up.

On a similar note, they also don’t carry the iPad Mini 3 or the iPad Air 2 (yet). To be fair, they said they would be expecting the Retina iMac sometime next month, so it seems that maybe it’s just that Apple isn’t giving priority of newer releases to their authorized resellers.

So it’s back to ordering online for me.

Creatures of the Night 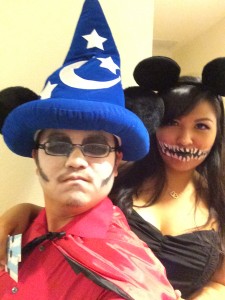 My baby and I decided to check our Creatures of the Night 2, a big Halloween party on Guam held at the Hyatt Regency Guam. We decided to go as another couple outfit with some dark/zombie-ish Mickey and Minnie Mouse costumes.

Sabrina did a great job with her big, scary teeth, didn’t she?! She was supposed to do the same thing to my face, but my mustache was in the way. With less than an hour left to do makeup, she decided to just give me long sideburns to go with my facial hair. It wasn’t as cool as hers, but I liked it.

The Guam Territorial Band will be playing a concert at the Lotte Hotel Guam banquet room in the bottom floor. I’ll be participating as Trombone! We’re going to be playing a pretty great set of songs in their amazing new facility, and on top of that, it’s FREE! Come check it out if you have time.

There will also be a nice, short encore of Chicago (the band) tunes from a band that we put together for a concert last month :)